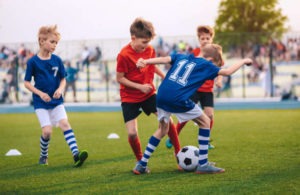 The Horsham Area Primary Schools Year 3 and 4 Football League got underway in fine style at the Tanbridge House School astroturf yesterday as 17 teams convened to give their all across two divisions of play.

In Division 1 Heron Way A and Kingslea drew a tight opening match one each and then both followed up with a full set of subsequent wins on the evening which establishes them as firm favourites for the title come the end of the second meeting in two weeks’ time when all the round-robin fixtures will be completed. Having played a game extra and with superior goal difference the Herons hold the upper hand. Freddie P was outstanding for the leaders whilst Kingslea’s goalkeeper Harry C performed heroics for his team.

Shelley B chances can’t be discounted either. They won three matches and although they suffered a surprise single goal reverse against St Robert Southwell A they are still to play both Heron Way and Kingslea next time out so can still have a big say in where the honours end up. Louis M was their main man showing great spirit and being happy to play anywhere in support of the team’s needs.

St Mary’s Pulborough head the chasing pack with a mixed bag of wins and losses. Leo D got all three of their goals. After a strong start a 2-0 defeat in their last match brought Leechpool A down to earth a bit, although with a match in hand they will still have hope of finishing highly in a fortnight. Harry W and Wally S were their leading lights. Max D’s leadership inspired St Robert Southwell to their excellent win over Shelley.

In the lower reaches Southwater A worked hard but did not enjoy their customary success. Harry K got his first ever goal for them – let’s call it a ‘Special K’ – and  Year 3 lad Ben S worked his socks off. Despite Melody C’s excellent defending and Bradan S’s craft and effort Arunside were defeated in all their matches.

So to the second tier, Division 2.

It was a memorable night for Slinfold, the small village school punching above its weight to register a full house of victories, scoring eight and conceding none in the process. Freddie H was their man, knitting together a mean defence and contributing 25% of their goals.

What made things even better for the Slinfoldians was that most of the teams below them were intent on drawing with and beating each other to make the gap to the top somewhat of a shared chasm with the possible exception of Heron Way B who sit just four points behind as a consequence of their unbeaten night of two wins and two draws. Tom B’s fantastic run and bullet shot goal versus Northolmes was the highlight of their evening and with them still to play Slinfold at the final meeting they’ll still fancy their chances.

Southwater and Shelley’s second teams share third spot. For the former girl power was evident with Evie A and Iris H working hard for their team and for the latter Hadley P was the goalscoring threat, one of his successful strikes coming direct from a corner, perhaps a case of Hadley’s Comet.

Castlewood and St Mary’s Horsham sit smack bang in mid table. Amidst all the conversation about petrol, gas and turkey shortages Castlewood added in a goal shortage with the first three of their games finishing scoreless before a Heron Way B single goal victory against them in the last round of games proved that goals were possible in their matches. In spite of the lack of goal action Jude AB’s commitment and Aden S’s spirit in support of the Castle cause shone through. For St Mary’s the highlights were George M’s silky ball skills, Caleb D’s selfless efforts and Marley’s unstinting enthusiasm.

Northolmes and Leechpool B lie equally placed and  just below Castlewood and St Mary’s by virtue of goal difference. Finley W showed grit and determination for the Northies and Darnell B’s leadership skills were notable and they’ll be particularly encouraged by their win over Southwater. Leechpool B managed to get one over them in the last match of the night however, the Roffey derby being decided by a single goal. Leechpool B captain Ashley C was their star player on the night.

Another Roffey school, St Robert Southwell B, prop up the Div 2 table but aside from a 4-0 mauling by Slinfold the Saints were still competitive managing two draws from their other three matches.

Roll on the next and final instalment in two weeks’ time.