Nutties Nail It At the Netball 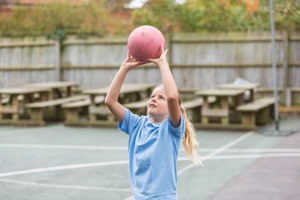 St Andrew’s Nuthurst came out all guns blazing in the first meeting of Division B of the Horsham Area Primary Schools Netball League tonight at The Bridge. Both their B and C teams won both of their opening fixtures to leave them vying neck and neck for an early top spot in the table.

Both hit four goals in their first match, the Bs overcoming Leechpool B and the Cs accounting for Shelley C. Both conceded goals on a night when all teams managed to score but who’s bothered about conceding one or two when you have belief in your own ability to score more?! In their second match Nuthurst B dampened the spirits of a North Heath team that had opened brightly with a win over Shelley B by 6-2. Nuthurst C had a tougher time in narrowly overcoming a St Mary’s Horsham team that had confidently seen off Leechpool C in its first match, by the odd goal in three.

Four of the eight teams managed a win alongside a loss on the night. In addition to the aforementioned North Heath and St Mary’s Horsham there was also Shelley B demolishing its B team 10-0 and Leechpool B also put away its C team stablemates in a game that was much more competitive, ending 5-2.

Shelley C and Leechpool C were the two teams ending winless, but they showed glimpses of promise so will look to future meetings with hope.

Thanks to Miss Simpson, Leechpool’s PE Coordinator, for supervising the meeting as cover for the regular leader, Natalie Jagota, who was self isolating.