Exciting Start to the Top of the Netball League 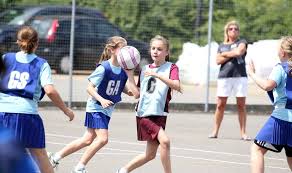 The Horsham Primary Schools Netball League got underway proper tonight at The Bridge leisure centre as the first meeting of Division A took place.

By the end of the meeting it was very much a case of ‘haves’ and ‘have nots’ as from the eight initial matches played, four teams won both their matches and the other four lost both of them.

All Saints continued their good form of the assessment event to very much end up on the side of the haves. Both Southwater teams were on the receiving end of the Saints’ blessings, Southwater B being hit hard with a 10-goal tally and Southwater A losing out by the odd goal in three.

Nuthurst A was also impressive in despatching the two Kingslea teams in decisive style, scoring a total of nine but not conceding any. Leechpool A was another watertight outfit. They accounted for the Southwater and Kingslea B teams by four and one goal to nil respectively.

Shelley A was the most thrilling out of the leading pack of teams. They amassed 13 goals in gaining their two wins over the Kingslea and Southwater teams but also conceded seven in the process. Indeed their 5-4 win over Southwater A was definitely the match of the day.